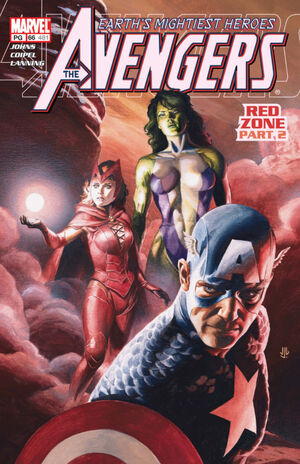 No. ... This didn't come from any terrorist. This came from us.

Iron Man and Black Panther's effort to neutralize the cloud at a government research facility is roadblocked as the US Secretary of Defense escorts them out as they no longer sponsored by the United States. Meanwhile, the rest of the team pushes deeper into the deadly red cloud at the base of Mount Rushmore. They uncover a secret lab and learn that the deadly cloud seems to have been made by a US bio-weapons lab.

Retrieved from "https://heykidscomics.fandom.com/wiki/Avengers_Vol_3_66?oldid=1408631"
Community content is available under CC-BY-SA unless otherwise noted.