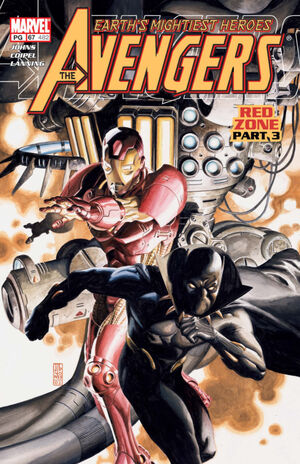 As the deadly red zone continues to expand, the Avengers move deeper into the US bio-weapons lab and learn more about its origins. They then have a run-in with some A.I.M. soldiers and their fight leaves the She-Hulk's suit damaged. Jack of Hearts tries to get her to the surface, but she changes back to her Jennifer Walters human form which apparently is ravaged by the virus.

Meanwhile, back at Stark Technologies, Stark and Black Panther try to work together to find a cure, but are attacked and captured by the US army.

Retrieved from "https://heykidscomics.fandom.com/wiki/Avengers_Vol_3_67?oldid=1408632"
Community content is available under CC-BY-SA unless otherwise noted.