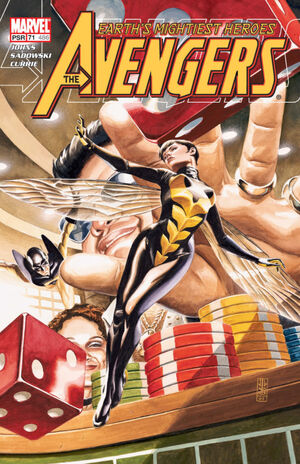 Janet and Hank continue their rekindled romance and enjoy a Las Vegas getaway. Hank, driven by his newfound passion for Janet, proposes to her. Janet turns him down as she's just not ready for that kind of commitment right now. That awkward moment is interrupted by The Whirlwind who's out to get his revenge on The Wasp. Hank and Janet take him down.

Retrieved from "https://heykidscomics.fandom.com/wiki/Avengers_Vol_3_71?oldid=1408636"
Community content is available under CC-BY-SA unless otherwise noted.