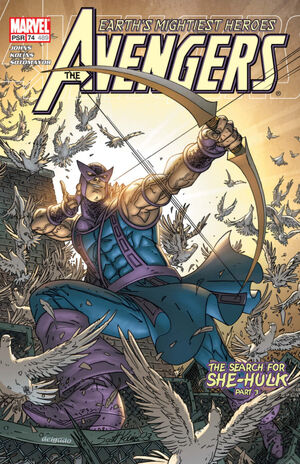 Appearing in "Sticks and Stones"Edit

Synopsis for "Sticks and Stones"Edit

Hawkeye takes on the She-Hulk single-handedly giving the rest of the Avengers time to regroup. He manages to lead her away from the city where they run into Bruce Banner who tries to calm her down. Unfortunately, the U.S. Army shows up which prompts Hawkeye to trigger Bruce's change into the Hulk to prevent the She-Hulk from killing any soldiers.

Retrieved from "https://heykidscomics.fandom.com/wiki/Avengers_Vol_3_74?oldid=1408639"
Community content is available under CC-BY-SA unless otherwise noted.