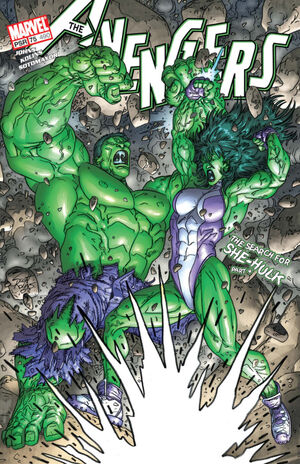 With the She-Hulk battling against the Hulk, Ant-Man frees Jack of Hearts from the Zero Room. The Avengers keep the Hulk and She-Hulk contained until Jack of Heart arrives on the scene and unleashes all his built up energy. Banner makes a quick exit while Jennifer Walters regains control of her She-Hulk persona. She gets a taste of what Banner has to endure in terms of guilt and pain for the Hulk's actions.

Retrieved from "https://heykidscomics.fandom.com/wiki/Avengers_Vol_3_75?oldid=1722922"
Community content is available under CC-BY-SA unless otherwise noted.