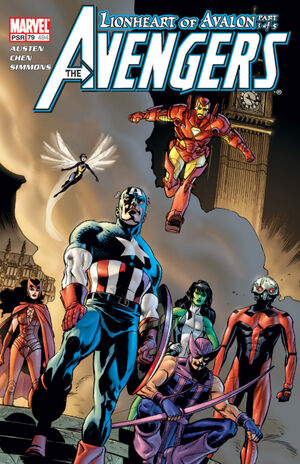 Brave woman. Avalon is not yet ready to say goodbye to you, milady.

The Avengers deal with the aftermath of their battle with the Wrecking Crew and the death of Kelsey Leigh. Captain America and She-Hulk try to console Leigh's children. Tensions erupt causing an uncomfortable dispute between Wasp and Yellowjacket. Hawkeye sets off on his own to settle the score with the Wrecking Crew, but it backfires on him resulting in a terrible beating. Meanwhile, some mysterious force from Avalon pays a visit to Kelsey Leigh's corpse.

Retrieved from "https://heykidscomics.fandom.com/wiki/Avengers_Vol_3_79?oldid=1408644"
Community content is available under CC-BY-SA unless otherwise noted.