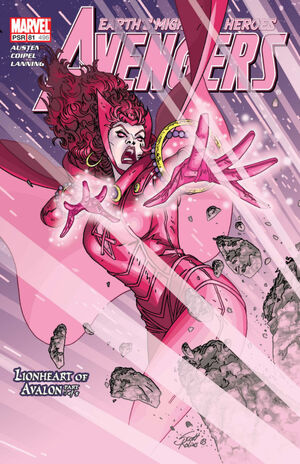 Why did I do this? What good did it do me to choose this life? My poor babies. I can't even comfort them. I would have been better off staying dead.

Kelsey and The Scarlet Witch follow the knight into the Otherworld and confront his master, Morgan le Fay. She has captured Captain Britain and seeks to do harm to Britain through him. However, it turns out that Kelsey now holds the power of England. All of sudden, Captain America shows up and gives Kelsey the opportunity to strike at Le Fay and symbolically assume the mantle of Captain Britain. Kelsey's children and their grandmother relocate to the Avengers Mansion.

Retrieved from "https://heykidscomics.fandom.com/wiki/Avengers_Vol_3_81?oldid=1408646"
Community content is available under CC-BY-SA unless otherwise noted.