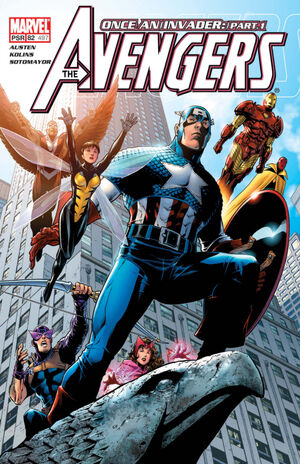 Appearing in "Once an Invader, Part 1"Edit

Synopsis for "Once an Invader, Part 1"Edit

John Walker (US Agent) rescues The Blazing Skull from a Middle East prison and offers him a place on The Invaders along side Spitfire and Union Jack. They intend on taking down The Avengers. Meanwhile back at the Mansion, a funeral service is held for Kelsey Leigh and she's made an honorary Avenger. Kelsey is still adjusting to her role as Captain Britain and lashes out against Captain America because she has to let her children believe she's dead. Meanwhile, Hawkeye puts the moves on the Wasp.

Retrieved from "https://heykidscomics.fandom.com/wiki/Avengers_Vol_3_82?oldid=1408647"
Community content is available under CC-BY-SA unless otherwise noted.