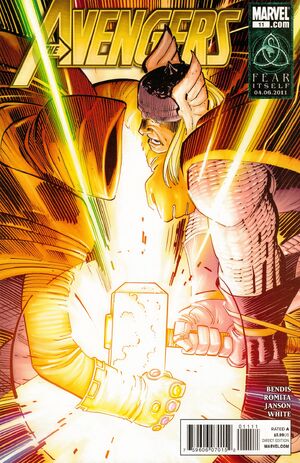 Uatu the Watcher is observing the battle unfolding, consisting of Thor, Namor and Red Hulk versus the Hood, for the possession of the fourth Infinity Gem. Uatu observes that the Hood does not comprehend the danger of wielding the gems nor knowing that he could simply use them to will his foes out of existence. The other Avengers soon regain consciousness and charge at the Hood. Thor tries to talk him down, only for the Hood to teleport to find Xavier's group. Xavier breaks his rule of invading another's mind with permission in an attempt to stop the Hood and fails. The Hood then goes into the astral plane, where he attempts to locate the final gem hidden by Doctor strange. Unfortunately, someone has already beaten him to it: Thanos.

Retrieved from "https://heykidscomics.fandom.com/wiki/Avengers_Vol_4_11?oldid=1408660"
Community content is available under CC-BY-SA unless otherwise noted.