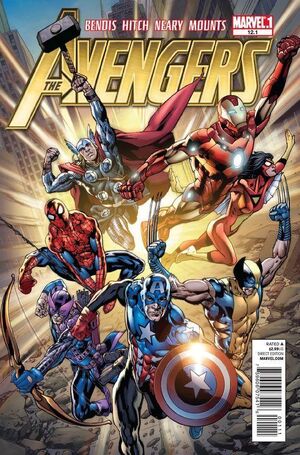 Appearing in "It Came from Outer Space (Knight)!"Edit

Prepare for the upcoming high-stakes Avengers event with a battle between the Avengers and the Intelligencia, the return of SWORD, and the disappearance of Spider-Woman!. Bendis and modern master Bryan Hitch join forces for this very special, all-new Avengers story that is not only an explosive action-packed self-contained thriller but a prologue to an Avengers saga that will rock the entire Marvel Universe next year. Guest starring the New and Secret Avengers!

Retrieved from "https://heykidscomics.fandom.com/wiki/Avengers_Vol_4_12.1?oldid=1653294"
Community content is available under CC-BY-SA unless otherwise noted.