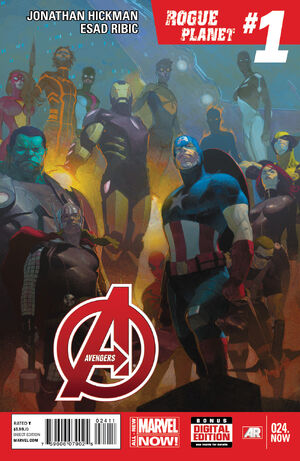 3030 AD In the Stark Experimental building Zhang-the current Mandarin-is putting together some device for the Iron Man of this time, who’s a machine. Two guards try to break down the vibranium door but it ends up getting broken down by someone else…..Franklin Richards. Franklin comes in and states that the device is a time machine; Franklin and the Iron Robot then have a quick exchange and Frank wishes the robot good luck before it disappears.

Atop the Avengers mansion Star brand, Hawkeye, and Sunspot play a game while the rest of the Avengers (excluding Captain America and Iron man) enjoy a barbecue. Inside, Captain America discusses with Tony ideas for a new roster but Tony think he’s over thinking it; the Avengers need to be simple and compact because the future is bleak. At that moment the Iron Man 3030 appears amidst the BBQ, Cap and Tony spring into action and are quickly defeated. The Iron Robot asks the date, Tony tells it that it’s December 2013 and the Iron Robot responds saying that it’s not “too late”. Later Iron Man and Iron Robot reveal to the Avengers that a nomad-a rogue planet- has been fired at the earth from the future and that’s is coming in only one month. Over the next four weeks the Avengers build a machine and are able to successfully merge the rogue planet with the earth. Tony confronts the robot and says that a robot wouldn't put space-time in danger to save a planet and asks the reason why the planet had to be merged with the earth in the first place. It responds by giving him a memory stick with and alternate ending and revealing that she is Rhodey Stark his great granddaughter. She says that the rouge planet will act as both a power source and a weapon and that’s its better than the Sol’s anvil and antimatter bombs that Tony and the Illuminati are working on. Because Tony’s right the future is bleak.

• Captain America and Iron Man plan for the next version of the Avengers.

• A runaway planet is on a collision course with Earth.

• A visitor from the future helps save the day.

Retrieved from "https://heykidscomics.fandom.com/wiki/Avengers_Vol_5_24.NOW?oldid=1646470"
Community content is available under CC-BY-SA unless otherwise noted.