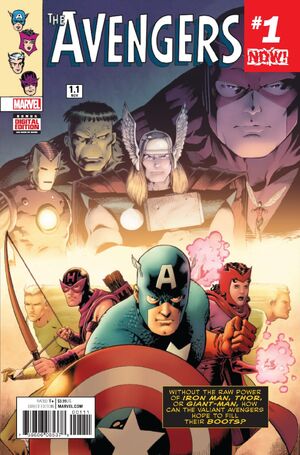 A carny with a bow and arrow, a super-speed keg of dynamite, and a bombshell whose powers "sometimes backfire." All three of them reformed villains. Thanks, Iron Man.

The Old Order Changeth – more than you ever suspected! For the first time ever, learn what really happened all those years ago when the founding Avengers turned their membership over to a set of new recruits. The recently thawed Captain America is joined by three reformed super villains – Hawkeye, Quicksilver and the Scarlet Witch – and a new group of Earth’s Mightiest Heroes takes shape – in a story that has direct ramifications for the Avengers of today!

Retrieved from "https://heykidscomics.fandom.com/wiki/Avengers_Vol_7_1.1?oldid=1655474"
Community content is available under CC-BY-SA unless otherwise noted.