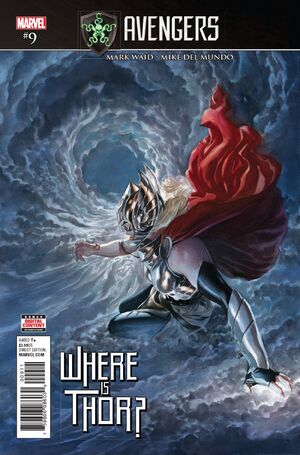 • The most loved Avenger of all has now shown his true colors — and the Avengers will have to put their allegiances to Steve Rogers aside and fight the good fight!

• But for one Avenger, that fight is very far away indeed! Trapped in a nameless land, a timeless time, can Thor find her way back to the here and now in order to return to the struggle?

Retrieved from "https://heykidscomics.fandom.com/wiki/Avengers_Vol_7_9?oldid=1652057"
Community content is available under CC-BY-SA unless otherwise noted.