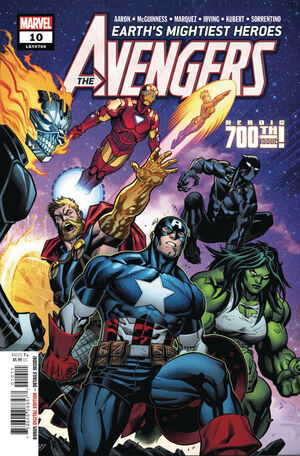 No one said this job would be easy, Avengers. Or even possible. That's why you're all here. Because none of you should be possible either. And nothing less of the utterly impossible is what I'll ask of you every time you answer our call. These are dark times, Avengers. And they are only trending further into darkness. If we're going to keep this planet intact long enough for its people to pull themselves back into the light, we'll have to do it one impossible day at a time. Today was a day unlike any other. Tomorrow will be more of the same. But that's our job description. That's why we stand together. If the world needs something to believe in, then let it believe in the power and promise of our most sacred words... Avengers assemble!

Appearing in "The Battle for the Right to be Called... Earth's Mightiest"Edit

THE EARTH’S MOST HATED HEROES?!

After 700 issues of saving the world, you’d think the Avengers would be due some celebration. But instead the whole world seems to be gunning for them, especially Namor’s fearsome new Defenders of the Deep and the reimagined Russian Super-Soldiers of the Winter Guard. And that’s not to mention the shocking surprise the U.S. government has in store for our heroes. Plus: The all-new Agents of Wakanda! The mystery of the Avengers of 1,000,000 BC deepens! A key revelation concerning the resurrection of Wolverine! And the next startling new Avenger is revealed!

Retrieved from "https://heykidscomics.fandom.com/wiki/Avengers_Vol_8_10?oldid=1655126"
Community content is available under CC-BY-SA unless otherwise noted.