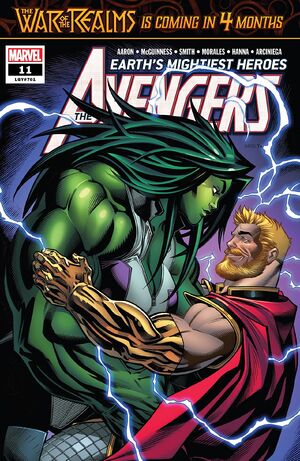 Our world today is rife with powder kegs. You can see them in every corner of the globe. Waiting to explode. Powder kegs, I can deal with. That is the job. But what worries me most... is the explosion I cannot see coming.

Appearing in "The Strength and Conviction of Phillip Coulson"Edit

Synopsis for "The Strength and Conviction of Phillip Coulson"Edit

Phil Coulson recaps how he used to idolize the Avengers while also remembering how Deadpool shot him and destroyed Lola.

At Avengers Mountain, Captain Marvel looks inside the Hell Charger as Robbie studies for a quiz. Captain Marvel mentioned that Black Panther has scheduled a meeting upstairs, Blade is still recuperating after he was rescued, and Thor and She-Hulk have left for the Savage Land.

In the Savage Land, Thor and She-Hulk are watching a Tyrannosaurus and a Triceratops fight each other.

In the Eden Room of Avengers Mountain, Black Panther has called a meeting with Arabian Knight from Saudi Arabia, Sabra from Israel, Sunfire from Japan, the Collective Man from China, Captain Britain from the United Kingdom, Shaman from Canada, and Ursa Major from Russia. He proposes that they must work together to keep the world safe from future invasions and make a support network for the superhero community. Arabian Knight and Sabra mention that Namor has lost his mind having made the ocean contested. Ursa Major comments that the Winter Guard doesn't need the Avengers' help.

Meanwhile, an unseen person insists to Phil Coulson that he is employed by Thunderbolt Ross too. Coulson claims that the person really works for Black Panther and then shoots him in the leg.

In the Savage Land, Thor says to She-Hulk that he wishes to know her better.

Back at the Eden Room of Avengers Mountain, Black Panther states to the representatives his theory that the U.S. government will not be their allies.

Meanwhile, Phil Coulson informs his captive that the Squadron Supreme passed their test in Alaska with flying colors. After the lights go out, numerous shots are fired, and when the lights come back on, Coulson's standing over his captive's corpse.

To deal with the fallout from last month’s world-shaking issue #700, the Avengers organize an international super hero summit, gathering heroes from the most powerful nations on Earth. But no one was expecting the shocking new representatives of the United States. The world is about to become a far more dangerous place. Especially for the Avengers. Plus Hulk and Thor try to go on a date.

Retrieved from "https://heykidscomics.fandom.com/wiki/Avengers_Vol_8_11?oldid=1655127"
Community content is available under CC-BY-SA unless otherwise noted.