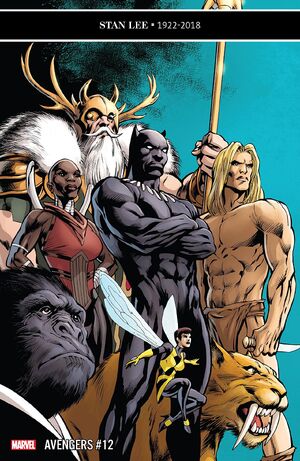 'tis a strange cadre of warriors you've assembled for yourself, Panther King. Most strange.

Appearing in "The Agents of Wakanda"Edit

It’s hard to run the Avengers without a support staff. And for a team as wild, weird and insanely powerful as this new Avengers squad, just one Jarvis would never do. Luckily, Black Panther has assembled the wildest and weirdest support staff you’ve ever seen. Meet Gorilla Man, Ka-Zar and the rest of the Agents of Wakanda.

Retrieved from "https://heykidscomics.fandom.com/wiki/Avengers_Vol_8_12?oldid=1655128"
Community content is available under CC-BY-SA unless otherwise noted.