Part of the 'War of the Vampires' story arc 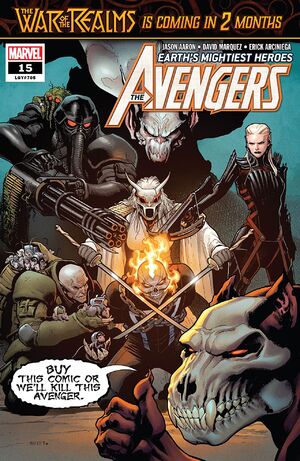 Rider, be a good boy and show your friends what you are now. What you were always meant to be.

Appearing in "The Battle for the Throne of the Damned"Edit

Dracula forges unholy alliances from his prison cell. Ghost Rider goes berserk. The Shadow Colonel and his new Legion of the Unliving raise bloody hell all over the globe. It’s a good thing the Avengers just added a startling new member to the team.

Retrieved from "https://heykidscomics.fandom.com/wiki/Avengers_Vol_8_15?oldid=1655155"
Community content is available under CC-BY-SA unless otherwise noted.