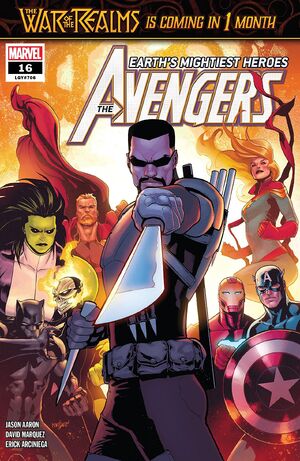 We've thinned the herd plenty. Weeded out the weak, the bloated old gentry. We have killed enough vampires. It is time, my brothers and sisters... that we made some new ones.

Appearing in "A Fistful of Blood"Edit

Welcome to the Avengers, Blade — hope you survive the experience! Though there are plenty of vampires out there that definitely won’t, as the civil war tearing apart the worldwide undead community rages on.

Retrieved from "https://heykidscomics.fandom.com/wiki/Avengers_Vol_8_16?oldid=1655156"
Community content is available under CC-BY-SA unless otherwise noted.