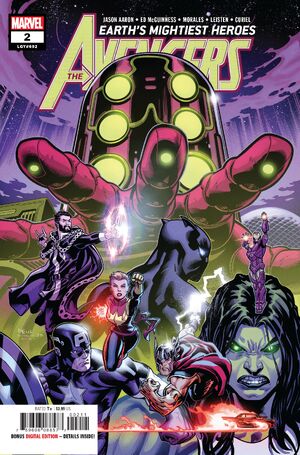 Appearing in "Still Avenging After All These Years"Edit

• Black Panther and Dr. Strange battle for their lives deep within the earth…

• Captain Marvel battles death and destruction raining down from the skies…

• …while Thor, Iron Man and Captain America lead the valiant (yet hopeless) fight against the Final Host of Dark Celestials.

• And Ghost Rider and the Savage Hulk make brutal war against... each other?

• Plus, you can’t have a gathering of Avengers without a certain Prince of Lies, now can you?

Retrieved from "https://heykidscomics.fandom.com/wiki/Avengers_Vol_8_2?oldid=1639911"
Community content is available under CC-BY-SA unless otherwise noted.