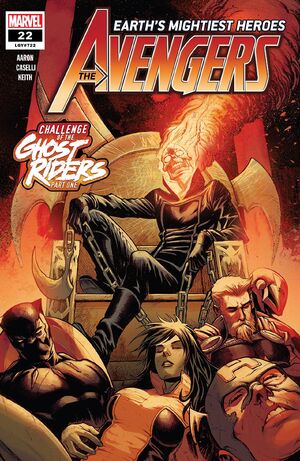 Appearing in "Challenge of the Ghost Riders: Part One - The Exorcism at Avengers Mountain"Edit

Robbie Reyes wants to get rid of the flame-headed monster inside him. So it’s time to do the common sense thing: perform an exorcism on his car. Only problem is, Johnny Blaze, the king of Hell, has some plans of his own for the newest Ghost Rider and his Avengers friends.

Appearing in "Everyone Is a Target: Part 10"Edit

Synopsis for "Everyone Is a Target: Part 10"Edit

Retrieved from "https://heykidscomics.fandom.com/wiki/Avengers_Vol_8_22?oldid=1669992"
Community content is available under CC-BY-SA unless otherwise noted.