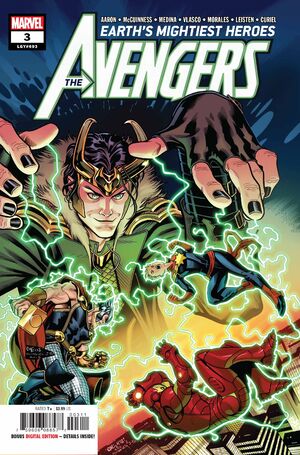 Nay! Cease thy civil warring! This is most verily unproductive! This is not how Avengers behave!

Appearing in "Where Space Gods Go To Die"Edit

THE FINAL HOST PART 3 FROM JASON AARON AND ED MCGUINNESS!

Fate has once again brought together Earth’s Mightiest Heroes to face their greatest challenge yet. But with Captain America now taken prisoner by Loki, what hope do these new Avengers have to defeat the Final Host of Dark Celestials? And what startling secrets are still left to be uncovered that will rewrite everything we know about the origin of the Marvel Universe?

Retrieved from "https://heykidscomics.fandom.com/wiki/Avengers_Vol_8_3?oldid=1655114"
Community content is available under CC-BY-SA unless otherwise noted.