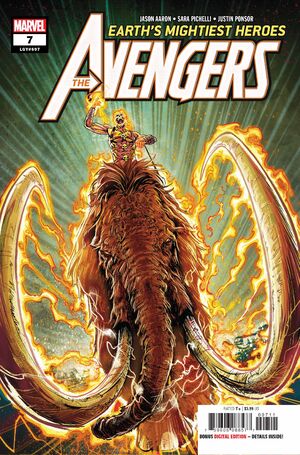 The bones say different, Wendigo. The bones say you've eaten your fill. Now it's their turn to feed. In the name of vengeance, I condemn you, Wendigo, to burn as long as there's fire in this world. To fall forever into damnation! To suffer for all eternity! Just like me.

Appearing in "Fire and Bone"Edit

If you thought you knew the beginnings of the Marvel Universe, you were wrong! Odin and his Prehistoric Avengers represent a period of Marvel history that’s never been explored. That exploration begins this issue with the origin of the very first Ghost Rider, one who rides a flaming woolly mammoth and battles a savage and familiar foe!

Retrieved from "https://heykidscomics.fandom.com/wiki/Avengers_Vol_8_7?oldid=1655123"
Community content is available under CC-BY-SA unless otherwise noted.