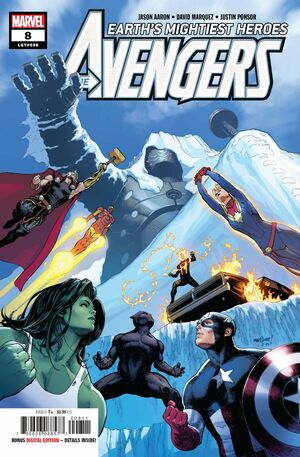 They want to give us a gift. The Progenitor. The first Celestial to ever visit the Earth. The one whose death gave birth to us all. They can't bring it back to life after so long, but... they don't want it to be buried anymore. It belongs in the sun. Shining like a beacon at the top of the world it helped forge. A beacon of hope. And of the wonders of life. And a warning about what'll happen... if anyone ever tries to stomp those out.

Appearing in "Inside Avengers Mountain"Edit

In the aftermath of their world-shaking battle against the Dark Celestials, the new Avengers team is officially formed, complete with a startling new headquarters at the top of the world. Behold the wonders of Avengers Mountain. But someone who doesn’t seem impressed is Namor, the ferocious lord of Atlantis, whose rage may turn the oceans red with blood!

Retrieved from "https://heykidscomics.fandom.com/wiki/Avengers_Vol_8_8?oldid=1655124"
Community content is available under CC-BY-SA unless otherwise noted.