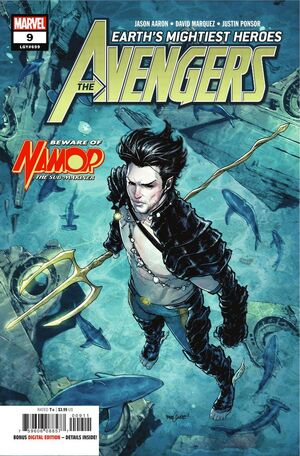 This holy war has just begun. And we will not misstep as we have in the past. No more armies hitting the beach. No more invasions. Let the air-breathers have their mounds of dirt and blackened skies. We fight for the seas, and those who called them home. The surface world has their Avengers. Now we have the Defenders of the Deep.

Appearing in "The Defenders of the Deep"Edit

With the underwater world on the brink of war, the Avengers go aquatic to save the day, but air-breathers are no longer welcome in the undersea city of Atlantis. And Namor, the Sub-Mariner, lord of the seven seas, has a bold new plan that will change the balance of power on Earth forever.

Retrieved from "https://heykidscomics.fandom.com/wiki/Avengers_Vol_8_9?oldid=1655125"
Community content is available under CC-BY-SA unless otherwise noted.