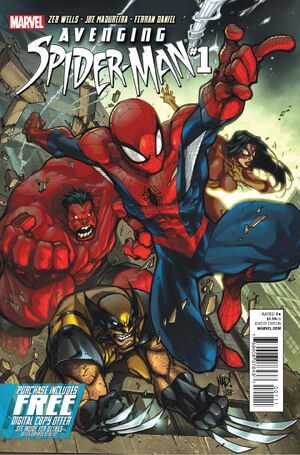 GET MAD! This is what you’ve been waiting for! The return of legendary artist Joe Madureira (X-Men, Battle Chasers) and fan-favorite Spidey writer Zeb Wells in a brand new, highly anticipated, monthly Spider-series that teams the wall-crawler up with some of the greatest heroes in the Marvel Universe. In our first issue, Spider-Man and Red Hulk take on a Moloid army during the New York Marathon! Stay safe until November because you’ll want to be here!

Retrieved from "https://heykidscomics.fandom.com/wiki/Avenging_Spider-Man_Vol_1_1?oldid=1653400"
Community content is available under CC-BY-SA unless otherwise noted.