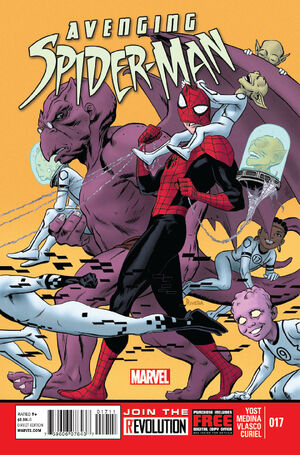 • THE SUPERIOR AGE CONTINUES as the Superior Spider-Man faces the future... the FUTURE FOUNDATION, that is.

• The Superior Spider-Man is forced to work with the FF as the literal future comes crashing in on them, threatening to destroy the Foundation itself and expose Spider-Man’s ultimate secret!

Retrieved from "https://heykidscomics.fandom.com/wiki/Avenging_Spider-Man_Vol_1_17?oldid=1754928"
Community content is available under CC-BY-SA unless otherwise noted.