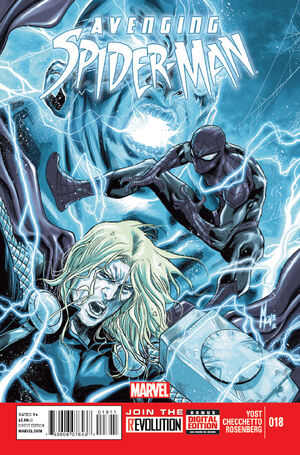 I underestimated Thor. I saw him as nothing more than an arrogant, brutish fool. And thought that's all true... He was willing to sacrifice himself for the people he protects. What am I willing to do? The day will come and when I have to ask myself that question. How far am I willing to go... to get what I want?

• The Superior Spider-Man faces off with THOR, GOD OF THUNDER!

• The return of ELECTRO!

• Can the Superior Spider-Man and Thor set aside their differences -- and EGOS -- to save the world? SPOILER: No! They can’t!

Retrieved from "https://heykidscomics.fandom.com/wiki/Avenging_Spider-Man_Vol_1_18?oldid=1412286"
Community content is available under CC-BY-SA unless otherwise noted.