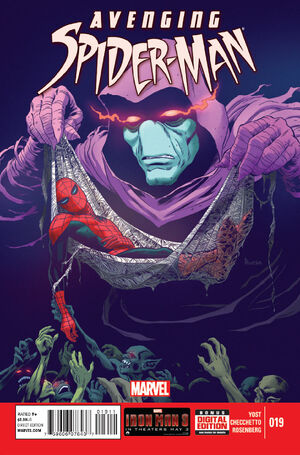 • Spider-Man is Doctor Octopus!!! There! Now, that we’ve got that off our chests... • The mysterious being known as SLEEPWALKER stalks Spider-Man in the waking world, while something far more horrible has invaded his dreams! • And what nightmares will the Superior Spider-Man’s dreams unleash on the world?

Retrieved from "https://heykidscomics.fandom.com/wiki/Avenging_Spider-Man_Vol_1_19?oldid=1412288"
Community content is available under CC-BY-SA unless otherwise noted.