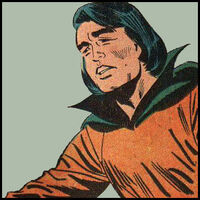 Awesome Bravo was an evil mutant who transformed himself into various villains, pretending that they were supposedly after him. He sought Steel Sterling's aid, but after fighting several fake adversaries, Steel saw through the prank and tipped off the "Mutant League" about Bravo's whereabouts. The "good mutants" came and removed Bravo's mystic might and took him away.

Retrieved from "https://heykidscomics.fandom.com/wiki/Awesome_Bravo_(Earth-MLJ)?oldid=1578725"
Community content is available under CC-BY-SA unless otherwise noted.