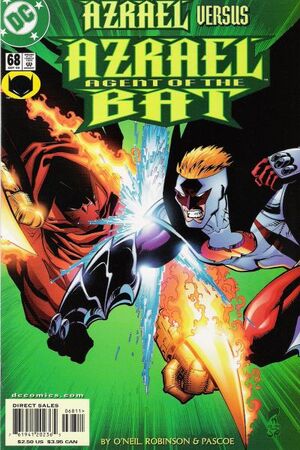 Who else can understand you? What you've gone through? Only me, because I've gone through it, too. Let's forget what we're supposed to be -violent, puppet assassins- and be brothers.

Reunited with Nomoz in the dessert, Jean-Paul Valley and his old mentor stumble across the mercenary army of General McGog, and the woman who may be his mother! Meanwhile, Faux-Azrael is on the same route, determined that now will kill Jean-Paul- but him, that is.

Retrieved from "https://heykidscomics.fandom.com/wiki/Azrael:_Agent_of_the_Bat_Vol_1_68?oldid=1410850"
Community content is available under CC-BY-SA unless otherwise noted.