Part of the 'Batman: Contagion' event 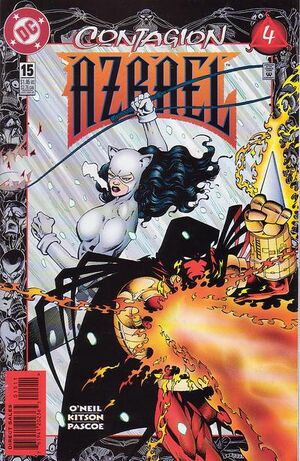 I figure you're going to be a pain in my butt from here on in, so maybe the best thing I can do is eliminate you right now.

Appearing in "Contagion, Part Five: Requiem for an Immortal"Edit

Synopsis for "Contagion, Part Five: Requiem for an Immortal"Edit

Azrael reads Kendall Stuart's diary and discovers who the other survivors to the virus are: a chinese criminal named Fong and a girl named Leanore. Azrael and Selina Kyle were driving a stolen car they took in Canada. Azrael asked Oracle for some information over the character Fong. Oracle provided the location of the man but before they could set out, Tracker attacked them. They decided to make a truce until they captured Fong.

Fong was staying in a yatch near San Francisco. Fong believed that he was some kind of "superman" because he survived the plague and dared his cronies to try to hurt him to prove it. They wouldn't do it but he was cutting himself to prove them that he was inmortal. The unlikely alliance of Azrael, Catwoman and Tracker were on the way to find Fong. While flying, Azrael contacted Lilhy to discuss their feelings. When they arrived at Fong's yatch, Azrael took down all the henchmen and Tracked broke down the door to Fong's chamber. Catwoman offered Fong a one million dollars of the payment for some samples of his blood and Tracker threatened to hurt him badly if he didn't cooperate but Fong refused saying that money is nothing compared to eternal life and to prove he was immortal he stabbed a knife through his heart killing himself almost immediately; leaving the trio without money and Gotham City with less hope.

Retrieved from "https://heykidscomics.fandom.com/wiki/Azrael_Vol_1_15?oldid=1503173"
Community content is available under CC-BY-SA unless otherwise noted.