Part of the 'Genesis' event 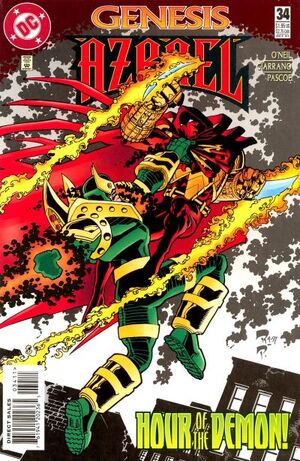 Azrael meets one of Darkseid's Parademons, who challenges him to a fight in which the winner will claim Azrael's soul. Azrael hopes to avoid this fight because he is fearful of losing, and continually flees from the Parademon. After Azrael helps a homeless boy whose father has rejected him, Azrael sheds tears of sympathy, and the Parademon chooses to abandon his pursuit because he perceives compassion as a trait of a weak soul.

Retrieved from "https://heykidscomics.fandom.com/wiki/Azrael_Vol_1_34?oldid=1410796"
Community content is available under CC-BY-SA unless otherwise noted.