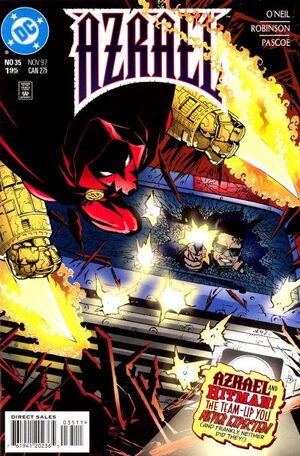 It's a mess in there. He about half-thinks he's an angel... An angel with a bulletproof vest.

Appearing in "The Angel and the Hitman"Edit

Synopsis for "The Angel and the Hitman"Edit

Attempting to aid his sick friend, Willy Ronton, Azrael tries to locate Willy's father Samuel. Unfortunately, Samuel also happens to be the target of the metahuman mobster Yancy Thork. Just before he himself was shot by Tommy Monaghen, the Hitman, Yancy made him swear to find Ronton to "settle some scores." As both Azrael and Hitman draw closer to their target, the two team up to fend off some unsavory types. Discovering that Ronton is innocent of Thork's accusations, Tommy knocks off the true perpetrator, and Azrael brings Samuel back to his son.

Retrieved from "https://heykidscomics.fandom.com/wiki/Azrael_Vol_1_35?oldid=1503174"
Community content is available under CC-BY-SA unless otherwise noted.