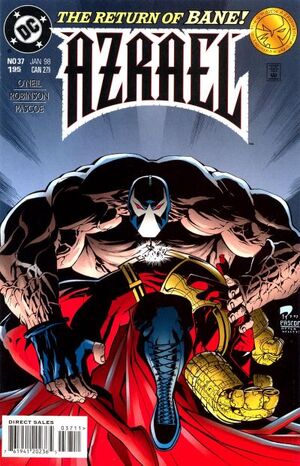 Appearing in "Battle With a Bird: Angel and the Bane, Part Two"Edit

Synopsis for "Battle With a Bird: Angel and the Bane, Part Two"Edit

Bane sets his plans in motion and frees his henchman, the deadly Bird. In the last minute Azrael decides against going with Lilhy to Mexico and goes after Bane. With Azrael hot on his trail, Bane formulates his new and improved Venom formula. With Bird as his guinea pig, Bane sics him on Azrael, who, after a vicious battle, defeats the drug-enhanced villain. Bruised and battered, the hero and Nomoz are no match for the calculating and powerful Bane.

Retrieved from "https://heykidscomics.fandom.com/wiki/Azrael_Vol_1_37?oldid=1410799"
Community content is available under CC-BY-SA unless otherwise noted.