Start a Wiki
Part of the 'Batman: Cataclysm' event 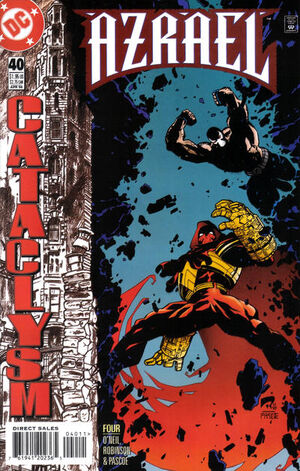 I'll tell you something I never admit, even to myself... I'm confused. I don't know exactly who I am, or where my place might be. But I am sure of one thing... I am nothing like you.

Appearing in "Cataclysm, Part Four: Hour of the Quake"Edit

Synopsis for "Cataclysm, Part Four: Hour of the Quake"Edit

Azrael has defeated Bane and is now taking him back to Gotham City in a helicopter piloted by Nomoz.[1] They are going to take him to Blackgate Penitentiary. Bane attempts to reason with Azrael, explaining that they are two of a kind, both men with a savage beast inside driving them. If they worked together they could have everything... money, women, power. As the copter lands, Azrael prepares to hand Bane off to GCPD officers Bock and Essen. Suddenly they are hit by a massive earthquake.[2] Bane escapes in the chaos and Azrael chases after him. He finally catches up to him in the vault of a bank, where Bane has already killed several people. The villain is giving him a demonstration of all of the things they could possess, if Azrael would only see reason and fight alongside him. They would take what they want and become legends, killing whoever gets in their way. Azrael completely refuses, and explains to Bane that he is nothing like him while they fight. Jean-Paul gets the upperhand and beats Bane, then drags him out into the street and takes him back to custody.

Retrieved from "https://heykidscomics.fandom.com/wiki/Azrael_Vol_1_40?oldid=1509570"
Community content is available under CC-BY-SA unless otherwise noted.