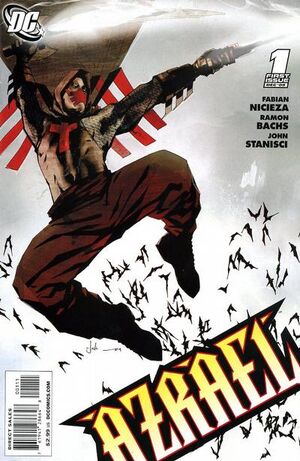 See heaven! Feel hell! And know that you're forever lost between the two!

Appearing in "Angel in the Dark"Edit

Synopsis for "Angel in the Dark"Edit

Azrael tracks down a serial killer, while at the same time struggling with personal issues and what it means to be the "good guy." Meanwhile, a series of scenes from six months into the future show Michael Lane's macabre but strange fate.

Retrieved from "https://heykidscomics.fandom.com/wiki/Azrael_Vol_2_1?oldid=1501119"
Community content is available under CC-BY-SA unless otherwise noted.