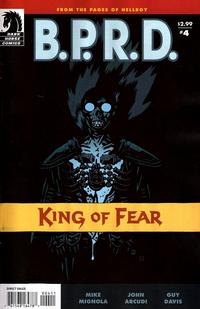 Abe Sapien is disbelieved of the Black Flame's words to him, believing that he is sowing confusion and mistrust among his team. Black Flame, however, insists that it is not the case and show one of the Frog Monsters to Abe, telling him that he is no different from the creatures as he is the next evolve form of the Frogs. But also the "first new man."

Meanwhile, Liz and Memnan Saa approaches the ruined B.P.R.D. aircraft, which Liz points out that the Bureau doesn't anything like this. Memnan Saa correctly tells her that the aircraft would be built in the future. Liz doesn't believe what he is saying and believes it to be another vision as it were, Saa wouldn't be here in the future at all. Saa simply reply that in death, he can transcend through time.

Retrieved from "https://heykidscomics.fandom.com/wiki/B.P.R.D.:_King_of_Fear_Vol_1_4?oldid=1514128"
Community content is available under CC-BY-SA unless otherwise noted.