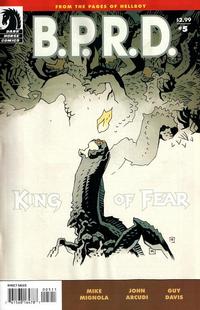 B.P.R.D. Director Thomas Manning, Kate Corrigan and Johann Kraus are in a international hearing with the United Nations Security Council. During the hearing, it is revealed that after Abe Sapien, Andrew Devon and the other B.P.R.D. agents were sent to the Karwendel Mountains in Austria and are recovering in an hospital, Southeast Asia was greatly devastated by massive volcanic activities in the Pacific Rim's Ring of Fire, and as well the appearance of a Ogdru Hem in California's Salton Sea. Which it behaves as similar to its brethern Katha-Hem in Nebraska. Expunging its breath which drifts into the air, catching anyone to be exposed and mutated into Lovecraftian monsters where the breath goes. The Council raised concerns that the B.P.R.D. didn't and rarely ever addressed to the UN of any global paranormal, threat besides the United States and noted that the recent events are not of a domestic problem (which Manning had earlier ironically stated to the U.S. Joint Chiefs). In so the Council unanimously decided that the B.P.R.D. is officially improve to be a international organization with direct supervision from the Security Council, and as well providing the B.P.R.D. with necessary funding and resources. This statement greatly surprises Manning and the others, and be able to win the "Frog War".

Meanwhile at the Colorado Headquarters, Panya is getting better in her health and be expected to walk on her own in a year or so.

In Austria, Abe Sapien and Devon are recuperating and telling Bruno Karhu of what had happened under Agartha with the Black Flame and their mystical transportation to the Karwendel Mountains by the old shaman. Forcing Abe and the others to climb down and suffering only frostbites. But they couldn't find Liz since. Kate then visit them and see to Devon, worthwhile noting how the once scholar is now a combating veteran. Devon then personally tells Kate a favor to move his bed far away from Abe. Believing what the Black Flame had told before that Abe is evolutionary connected to the Frogs and the Ogdru Hem.

In Indonesia, Marsten, the scientist of the Zinco Corporation's R&D department who had previously helped the Black Flame, is now a director of the said corporation. He travels to a region of the battered nation, stating that he intends to have Zinco, at its fullest, to help rebuild Southeast Asia with its latest technologies and believes that the corporation can literally change the world.

Somewhere under the sea, the sole member of the Oannes Society, McWhirter, survived his encounter with Abe Sapien and observes the news bulletin of the Ogdru Hem in California from his Victorian era submarine. Noting that "it begins."

Elsewhere, Liz Sherman is at a bar in Bangkok, Thailand, asking two French tourists for a light to her cigarette. Apparently, she lose her power of pyrokinesis.

Retrieved from "https://heykidscomics.fandom.com/wiki/B.P.R.D.:_King_of_Fear_Vol_1_5?oldid=1413058"
Community content is available under CC-BY-SA unless otherwise noted.