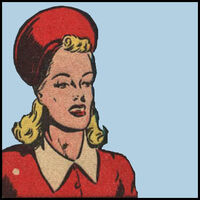 Barbara Sutton was a high-society girl, who later found a job as a news photographer for the Northville Courier, so she could cover stories and help the Black Hood as his confidant. She was quickly promoted to a news reporter. After she confessed to Kip, that she knew his secret identity, they became an "official" couple.[1] Later, when he retired as the Black Hood, he opened his own detective agency and she become his secretary.