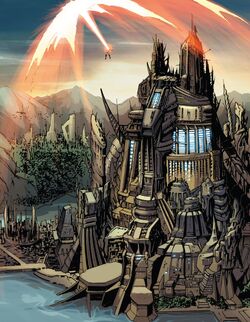 Barbuda is an island located on the Caribbean Sea and is part of the country Antigua and Barbuda.

In 1945, the island was invaded by Venusians led by American criminal George Mulford. They slaughtered most of the islands population in order to steal its wealth. They were opposed by the Sub-Mariner, who slew Mulford and his army of alien invaders.

Barbuda was later sold to A.I.M., where they decided to establish their own sovereign nation and become public.[1]

Using an unknown device, A.I.M. accelerated the flow of time within the limits of the island, creating an empire around it.[2]

Catherine interviewed the Scientist Supreme after the death of Senator Ralston.[3]

It should not be confused with their former A.I.M. Island in Boca Caliente. Both islands declared sovereignty under the auspices of A.I.M. and have received diplomatic status as an independent nation/entity.

Retrieved from "https://heykidscomics.fandom.com/wiki/Barbuda?oldid=1623082"
Community content is available under CC-BY-SA unless otherwise noted.