The strip now known as The Bash St Kids was created as 'When the Bell Rings' by Leo Baxendale, and first appeared in The Beano in issue #604 on the 13th February 1954. It became 'The Bash Street Kids' in 1956 and has been a regular feature in the comic ever since, arguably the second most popular feature after Dennis the Menace.

The Bash St Kids concerns the misadventures of Class 2B of Bash St School and their cast of supporting characters - notably Teacher (who still wears a mortar board even now, decades after they disappeared from most establishments), the Headmaster (likewise), Olive the dinner lady, the Janitor and Winston the school cat. The kids themselves are: Danny (sometimes called Deathshead Danny because of his distinctive skull & crossbones shirt), Smiffy, Spotty (whose name may actually be Jasper), the myopic 'Erbert, Wilfrid (he of the face obscuring jumper), the twins Sidney and Toots, Fatty, and Plug, though in early strips a huge cast of mostly unnamed kids (the exceptions being Teddy, Jimmy and Ella, though Jimmy may actually have been Smiffy) appeared, with most of the more familiar current cast coming later. There are also a couple of irregular members of the class - Teacher's pet Cuthbert Cringeworthy and Wayne (the latter created as part of a reader's competition: Wayne was perpetually injuring himself). In a run of text stories in The Wizard, some of the characters were given full names: Danny is Daniel "Deathshead" Morgan, Smiffy is James Smith, Sidney is Sidney Pye, Toots is Kate Pye, Plug is Percival Proudfoot Plugsley, Fatty is Fatty Fudge. Spotty didn't get a full name here as he was yet to make his debut. Teacher's real name is apparently Algernon, while his wife (who looks exactly like him, even down to the moustache) is only ever referred to as 'Mrs Teacher'. Plug got his own comic in 1977, which revealed his full name to be Percival Proudfoot Plugsley.

Though created by Baxendale, he was replaced in 1962 by artist David Sutherland, who has come to be regarded as the definitive Bash St artist since then (though several others have filled in on occasion).

In 1967, the Kids' centrespread started putting out a weekly cut-out 'puppet' series kicking off with a unique kid each issue. This very successful series eventually included the majority of BEANO characters from this period, ending with a cut-out 'Billy the Cat' in 1969. The puppet artwork took up around a quarter of the centrepage space, ensuring that the stories were never reprinted within BASH STREET KIDS annuals (which started with stories from the late 1960s anyway). 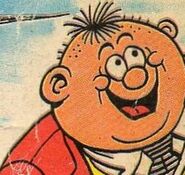