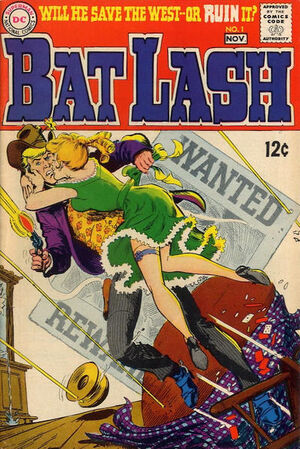 A lynch mob gathers outside of the No Hope Junction Sheriff's office demanding Bat Lash for his "misunderstaning with" the Sheriff. Lash is rescued by his paramour Sarry Lou and heads off for greener pastures.

Along the way, he encounters the monk Brother Sebastian who tells Lash he's searching for the lost fortune of Don Sergio Aragones and hopes to use it to educate Native American children. The key to the fortune's location lies in a gold cross that has been split into three pieces, each held by a different monk. Before the two men part, Lash steals Sebastian's pocket watch and proceeds to follow the clergyman after finding the watch broken.

Hearing gunfire, Bat Lash is felled by robbers who have murdered Brother Sebastian. The next morning, Lash rides to the nearby town of Wormhole where he encounters Sebastian's niece. Soon, Lash visits the local monastery, finding it populated by peculiar monks. Returning to town, Lash is arrested on the charge of murdering Brother Sebastian but soon escapes by holding Sebastian's niece hostage. Returning to the monastery, he learns of the bandits' plot to steal the hidden fortune once the final monk arrives.

Attempting to ride away in disguise, Lash encounters the sheriff and his posse accompanying Sebastian's niece to the monastery. She reveals a third piece of the cross to Lash who offers to help the sheriff capture the bandits. The treasure is soon found and our hero rides off into the sunset.

Retrieved from "https://heykidscomics.fandom.com/wiki/Bat_Lash_Vol_1_1?oldid=1413256"
Community content is available under CC-BY-SA unless otherwise noted.