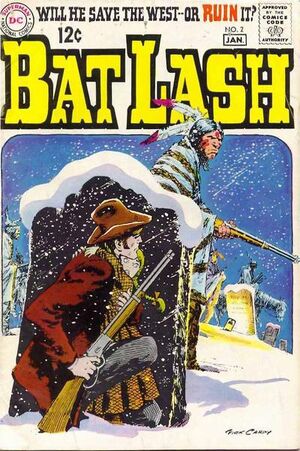 If those youngsters I hired don't hurry, I'll have a fate a blamed sight worse'n death--namely matrimony!

Bat Lash is about to be married to the youngest of the Gilkin daughters at gunpoint when youngsters he hired earlier release bags of mice into the church and cause a ruckus allowing Bat to escape though he loses his coat and right boot in the process. He rides off on Daisy into a snowy blind canyon.

Further in the canyon, a Marshal and his daughter, Melinda, are trying to escape two gunmen when their covered wagon hits a rock. The Marshal hides a metal cigar case inside Melinda's doll, Suzy, and hides Melinda in a hollowed tree stump. The Marshal is shot and killed. Bat arrives later and takes the Marshal's coat and boots when Melinda appears believing Bat to be her father (likely due to fear/denial). Bat takes her to the nearest city, Serenity, where he unsuccessfully tries to pass Melinda onto other people earning the ire of the townsfolks. This is observed by Samuel E. Styff, undertaker, who mistakes Bat for the Marshal whom he had ordered killed.

Bat goes into Polly's Inn to get some dinner and discovers Polly takes in children who have lost their parents. Two of Styff's henchmen enter but Bat chases them off causing Polly to take Bat's guns/belt until he's ready to leave. However, Styff promises a free funeral to whomever kills the Marshal and Bat is forced to flee without his weapons. Bat and Melinda enter the cellar of the funeral parlor and hide in coffins and are unwittingly transported to the cemetery. There they discover that Styff has been selling guns to native americans by hiding/transporting the guns in coffins. Bat witnesses this and pockets the native americans' payment (about $4K) when they are ambushed by Styff and his men. One of them shoots Melinda and a tearful Bat takes them all down. Bat discovers Melinda is alive, the doll having stopped the bullet and Bat discovers the metal cigar case inside of which is a receipt proving Styff's actions. Bat takes the captured criminals back to town and reveals what's been happening to the townsfolk who are angry as the native americans have been using their guns against the townsfolk. They cart the criminals off to jail and Polly takes custody of Melinda; Bat gives Polly a bag of gold to pay for her care. Bat then enters a restaurant and begins wooing the beautiful Patty Lou Smithers when Melinda enters unwittingly driving off Patty and angering Bat. She only wanted to say goodbye and give Bat a flower she picked for him. Bat hugs her and takes her back home.

Retrieved from "https://heykidscomics.fandom.com/wiki/Bat_Lash_Vol_1_2?oldid=1588056"
Community content is available under CC-BY-SA unless otherwise noted.