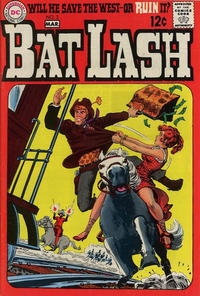 Appearing in "Samantha and the Judge"Edit

Synopsis for "Samantha and the Judge"Edit

Four gunmen head towards a saloon intent on gunning down Bat Lash who had sold them "farmland" which was actually a lake. A lady named Annie Jo tries to stop them lamenting that it "isn't fair." Bat appears both of his arms excessively bandaged from shoulder down and he claims to have burned his hands on a stove. The bandaged arms are decoys and he manages to gun the men down first and promptly leaves town.

Later, in the woods, Bat hears beautiful singing and comes upon a woman bathing in a creek. He accidentally alerts her to his presence only to discover she is a strong, brute of a woman who ropes him and brings him home to await punishment from her husband, the local Sheriff. Bat prepares to escape but is tempted by the aroma of her cooking and manages to charm the woman and get a free meal. Her husband arrives and attacks Bat only to be subdued by his wife. The Sheriff leaves and Bat offers to find him and explain the situation. The Sheriff offers Bat the chance to become his number 2 deputy which Bat refuses until he sees the number one deputy, the lovely Samantha Eggbert.

The Sheriff and Bat attempt to cross a wooden plank "bridge" over a muddy area but local bully Snapper refuses to let them cross using his whip to trip the Sheriff into the mud. Bat grabs the whip pulling Snapper into the mud and shoots the plank causing his gang to also fall. Later the Sheriff and Bat enter the saloon (which also serves as the trial court) in time to witness judge Nero provide an excessively harsh sentence on a citizen. This upsets the Sheriff but Bat is distracted by two lovely women. The Sheriff leaves to try and persuade the judge to soften his ruling.

Nero, now dressed like his Roman counterpart/ancestor, discusses his desire for conquest with Samantha, who appears motivated by wealth, but they are overheard and confronted by the Sheriff whom Nero kills. They decide they need a scapegoat and select Bat Lash who is imprisoned. After a farce of a trial, Bat is sentenced to hang the next day. While selecting a coffin, headstone and burial plot, Bat manages to show Samantha the beauty of life and she has a change of heart. Samantha drugs/poisons Nero's wine and rescues Bat from the noose. With a satchel of money she and Bat race to catch a moving train but Bat snatches the satchel and leaves Samantha behind to be caught by Nero's men. Samantha reveals the bag is filled with dirty laundry having expected a double cross from Bat.

Retrieved from "https://heykidscomics.fandom.com/wiki/Bat_Lash_Vol_1_3?oldid=1588060"
Community content is available under CC-BY-SA unless otherwise noted.