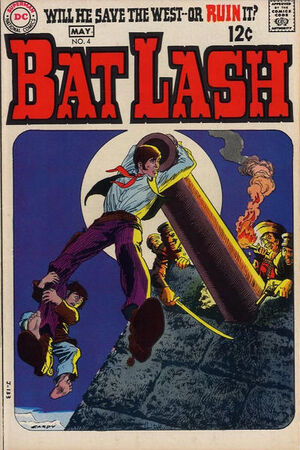 Appearing in "Bat Lash in Mexico!"Edit

Synopsis for "Bat Lash in Mexico!"Edit

Bat Lash is brawling with numerous townsfolks who are angered th=at Bat has been ogling and smooth-talking their women. The brawl escalates as guns are drawn when the ladies in the town pull weapons on everyone ordering Bat to leave - they are afraid Bat might kill their men - and Bat leaves gratefully.

Bat encounters a stagecoach robbery of a man and young woman. The man is killed and the robbers find gold prompting Bat to intervene killing the robbers and preparing to abscond with the gold when the girl mentions "millions." Bat escorts to girl into Mexico where they are ambushed by Mexican soldiers. Bat tries to fight them off but falls pretending at first to have been killed until dust makes him sneeze giving him away. He manages to steal a horse and rides towards the U.S. followed by the soldiers as Bat still has the gold on him. He falls off the horse on rough country and is overtaken by the soldiers but they are killed by a group of people led by Pedro from the first town. When Pedro threatens to kill Bat, Bat offers his services. Pedro reveals that the young lady is a prisoner in Fort Juarez and has names of traitors/assassins that are close to their beloved governor. They want Bat to get the girl/names and a boy named Little Jose knows of a way into the fort and will lead him there.

Bat attempts to escape but the men who followed them threaten him and Bat and Little Jose enter the fort. Jose opens the main gate to allow the men to enter while Bat finds the girl and gets the names. Soldiers arrive and chase Bat and Jose to the roof where they attempt to hide by hanging from the nozzle of a cannon but they are spotted. Bat and Jose fall to the river below but Jose is shot while swimming away. Bat carries the boy all night and into the next morning to the Governor's village. Jose has passed away during the trek but Bat goes to warn the Governor and manages to convince the Governor's guards that the Governor is in danger. They interrupt an assassination attempt by the General and his men. The next day they hold a funeral for Jose with the young woman, Jose's sister, in attendance as Bat rides on.

Retrieved from "https://heykidscomics.fandom.com/wiki/Bat_Lash_Vol_1_4?oldid=1588061"
Community content is available under CC-BY-SA unless otherwise noted.