The Darkest Reflection is a Batgirl storyline published as part of The New 52. Following the timeline reboot in Flashpoint, it establishes Barbara Gordon's position in DCnU continuity. It's the debut arc of [[Gail Simon 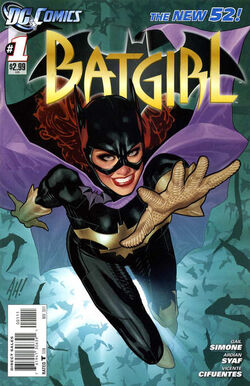 The Darkest Reflection is a Batgirl storyline published as part of The New 52. Following the timeline reboot in Flashpoint, it establishes Barbara Gordon's position in DCnU continuity. It's the debut arc of Gail Simone and Ardian Syaf on their new Batgirl volume. The story features Barbara returning to her Batgirl alter-ego after spending many years in a wheel-chair, and dealing with a new super-villain called the Mirror.

Barbara Gordon returns to her role as Batgirl, finally able to walk again after being crippled by the Joker. Having made a massive recovery, she is longer confined to a wheelchair and decides to move out of her father Commissioner Gordon's house. Alysia Yeoh becomes her new roommate. Her first case involves taking down a group of serial murderers called the Brisby Killers, who she easily dispatches. In the hospital afterwards, one of her perpetrators is slaughtered by a super-villain calling himself The Mirror who then turns his guns on her.[1] He escapes, and she chases him to a cemetery where she realizes that he's the survivor of a terrible fire that killed his family. Believing that life is a burden, he seeks out those whose lives were saved and puts things right in his mind by murdering them.[2] Mirror's next victim is caught in an explosion on the subway, which Batgirl tries but fails to stop. Nightwing visits and shows concern from her loved ones that she might push herself back into the chair, but she insists she must do this alone and makes him leave.[3] Finally, she sets a trap for the Mirror. Leaving a message on his family's gravestone, she leads him to a house of mirrors at an abandoned carnival. During their fight she uses the mirrors to make him examine himself by projecting news clippings of his accident, then incapacitates him by breaking his face.[4]

Batgirl next has to deal with a mind-controlling super-villain named Gretel who appears to be mentally ill. Detective Mel McKenna is put in charge of hunting down Batgirl by Commissioner Gordon. Gretel forces a group of criminals called the Whittaker Mob to kill each other, then makes Bruce Wayne a homicidal maniac.[5] Barbara realizes that Bruce is faking mind control for the witnesses, and finds a way to shut Gretel down. They discover that Gretel was an undercover reporter who gained mental powers after the Whittaker Mob shot her in the head. Her next move is to have brainwashed police officers assassinate Bruce Wayne during a public speech, but Batgirl teams up with Batman to take her down. They have Detective McKenna place Gretel in custody, and Barbara wonders if they weren't so different after all.[6]

Retrieved from "https://heykidscomics.fandom.com/wiki/Batgirl:_The_Darkest_Reflection?oldid=1549024"
Community content is available under CC-BY-SA unless otherwise noted.