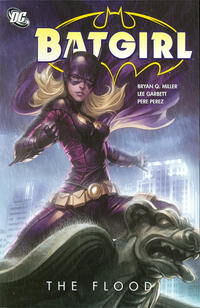 This paperback collects the Batgirl: The Flood storyline. It was published as the second paperback of the comic book series Batgirl. Originally this storyline was published from June to November, 2010. The storyline was written by Bryan Q. Miller. The illustrations are by Lee Garbett and Pere Pérez.

In this storyline a string of bizarre, technology-based suicides gets the attention of both Batgirl and Oracle. The two heroes soon realize that they're targets of The Calculator, a nefarious villain bent on revenge against Oracle.

Retrieved from "https://heykidscomics.fandom.com/wiki/Batgirl:_The_Flood_(Collected)?oldid=1518174"
Community content is available under CC-BY-SA unless otherwise noted.