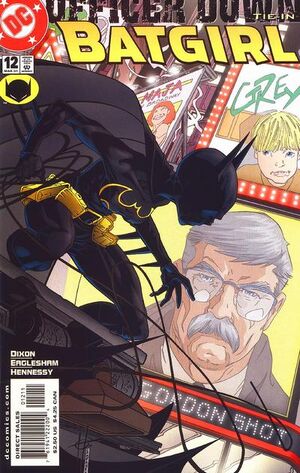 Batgirl hears the news that Commissioner Gordon has been shot and critically injured. She knows that Batman is his friend and Oracle is his daughter, so she sets out to find the others to help in the search for the gunman. At police headquarters, she hears that Catwoman is suspected of involvement in the crime, and she determines to track her down, getting a list of her known locations from the Clock Tower, and visiting each in turn. The last is Gothamview Tower in Midtown, and it seems that Catwoman does indeed live here, though she's not at home. Batgirl's presence activates a trap, but she evades the net, bear pit and tranq darts, only to find herself under attack from Slyfox and his gang, there to settle a score with Catwoman. Batgirl fights them off, trapping Slyfox in the bear pit with a broken leg. She sets out to find the others to help them, so that justice can be done.

Retrieved from "https://heykidscomics.fandom.com/wiki/Batgirl_Vol_1_12?oldid=1503126"
Community content is available under CC-BY-SA unless otherwise noted.