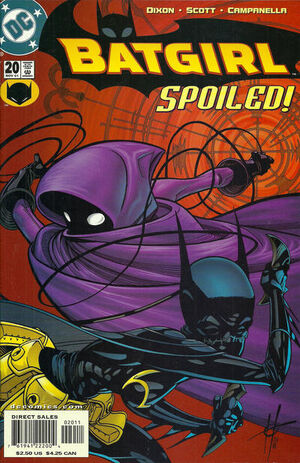 Dear Diary, I know what my next science project is going to be called: "My love/hate relationship with Gravity."

Batgirl attempts to intervene in a situation in which a handful of thugs attempt to rob a man, Island Jimmy, carrying a duffel bag filled with money (All persons involved are killed except for Batgirl). Inside the bag, she finds a note. Unable to read it, she brings it to Spoiler, who informs her it is a ransom note; however, neither are sure if it is the money being taken back to the kidnappers, or if it being taken to them. The two head to the meeting place, a train station, where the kidnapee's brother attempts to explain the missing money. When the brother is attacked and taken to the kidnappers' hideout, the two split up, each one heading back to the kidnapper's hideout by different routes. Spoiler and Batgirl discover that Miguel's brother, Falco, 'kidnapped' himself in order to get the ransom money. When Falco discovers a friend of his was killed during the transportation of the money, Spoiler and Batgirl intervene. Afterwards, Spoiler offers to teach Cassandra to read in exchange for tips and tricks.

Retrieved from "https://heykidscomics.fandom.com/wiki/Batgirl_Vol_1_20?oldid=1410913"
Community content is available under CC-BY-SA unless otherwise noted.