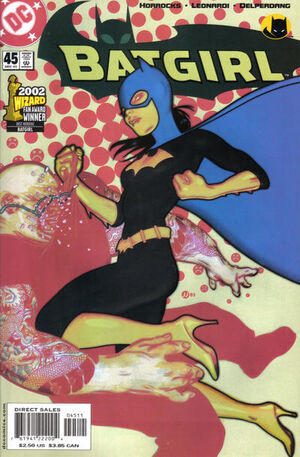 You know at the end of the day, when you close the door and you're all alone... And you strip off your armor and lower your guard and peel away the mask... When there's nobody watching and nothing to hide... And you no longer need to be strong or clever or pretty or brave... There's just you. That's it. That's the soul.

Batgirl patrols the streets of Gotham City. She finds a young couple causing disaster while tripping on a strange drug called soul. The woman is in a childlike trance, and the man Jeff is in a berserk rage. Jeff is strong enough to lift a car over his head and throw it, but Batgirl knocks him out. The girl looks into Batgirl's eyes and tells her that she has no soul.

Back at Gotham Clock Tower, Batgirl asks Oracle what a soul is. Oracle is unsure of how to explain it. Oracle asks how Batgirl's recent adventure in Tarakstan was, and guesses correctly that she is still struggling with Batman. Oracle comforts Batgirl by explaining that when she was Batgirl, Batman used to make her cry all the time. Despite this, Oracle reminisces about how much she loved being Batgirl. Barbara shows Cassandra her old Batgirl suit, and Cassandra decides to borrow it.

Batgirl returns to her cave and attacks Alfred Pennyworth as an intruder. Alfred reveals that he has been stopping by once a week to clean and restock her facilities. He asks if she ever wondered who was doing this, and she replies that she did not. Alfred talks to Batgirl about Batman, and assures her that Batman is just worried about her. Batgirl insists that she can take care of herself, and Alfred agrees.

Cassandra does research on Barbara Gordon's career as Batgirl, and decides to go out wearing her old costume. Batgirl takes down a group of muggers, but accidentally slips on her high-heels. The muggers laugh at her, and she knocks them out with a batarang. Robin is dealing with a violent riot of Soul users attacking, and Batgirl helps him. Robin remarks that she looks particularly hot in this costume, which he never noticed before. Robin gets clocked in the head, and Batgirl disperses the other rioters on her own. Batgirl finds a vial of Soul, and Robin explains that it's a new designer drug. It's supposed to make you feel blissfully happy, but it has the opposite effect on some people. Robin takes the drugs back to the Batcave for analysis. He tells Batgirl that she really does look fantastic in that costume, but she shouldn't let Batman catch her wearing it.

Batgirl returns to the Clock Tower and gives Oracle back her old costume. The high heels are broken, but Oracle assures her this happens all the time. Oracle offers to let Batgirl keep the costume, but Batgirl declines. Oracle tries to explain what a soul is to Batgirl, as Batgirl is falling asleep on her couch. Oracle puts a blanket over Batgirl and lets her rest.

Retrieved from "https://heykidscomics.fandom.com/wiki/Batgirl_Vol_1_45?oldid=1410938"
Community content is available under CC-BY-SA unless otherwise noted.